One of the biggest changes in my own practice on the trumpet has been quietly building over the past few years. It started with my Arban’s method, specifically #47 near the beginning of the book: 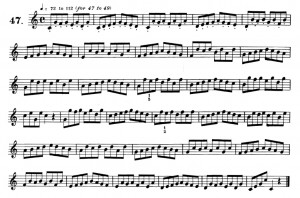 This is a classic Arban articulation study, and as you can see it is very repetitive! First, I “memorized” the study. I use quotation marks here because I didn’t really memorize each note – it’s just the same two bar pattern over and over again. Then I tried playing it from memory in different keys. I knew the pattern, I knew my scales (or so I thought), so how hard could it be?

Initially, this way of practicing was very frustrating. However, after a week or two of daily practice I could play the exercise in every major key. I even used this exercise in lessons with students, teaching them the pattern by rote without ever looking at the book.

Even though I’ve memorized many exercises and pieces (sometimes deliberately, sometimes accidentally, often in many keys), this experience stands out to me. Rather than learning by reading then memorizing by repetition, I was much more conscious of the patterns and scale degrees in the music rather than specific pitches. I started repeating this approach: select a new exercise, learn the pattern and memorize it, transpose it from memory.

Eventually this evolved into a part of my daily practice routine, and for the past year or so it has taken the form of scale patterns. Every week I pick a new scale pattern or use an old one in a new form such as minor, whole-tone, or chromatic. I use a three-day rotation of keys to keep everything balanced:

I usually play these scale patterns as “flow” exercises after the Cichowicz long-tone studies, once I’m starting to feel warmed up and have built my range for the day. I focus on having an easy, rich tone and great flow complemented by good finger technique (this has been one of the biggest benefits for me, as my finger technique has historically been pretty sloppy). Often, I will incorporate a mix of slurring and tonguing later on, to try to bring that sense of flow into my articulation.

To get the ball rolling, here are the two patterns I started with, as found in my old version of the Cichowicz flow studies. Strangely, when his Long-Tone Studies were finally published, they did not include this page of exercises: 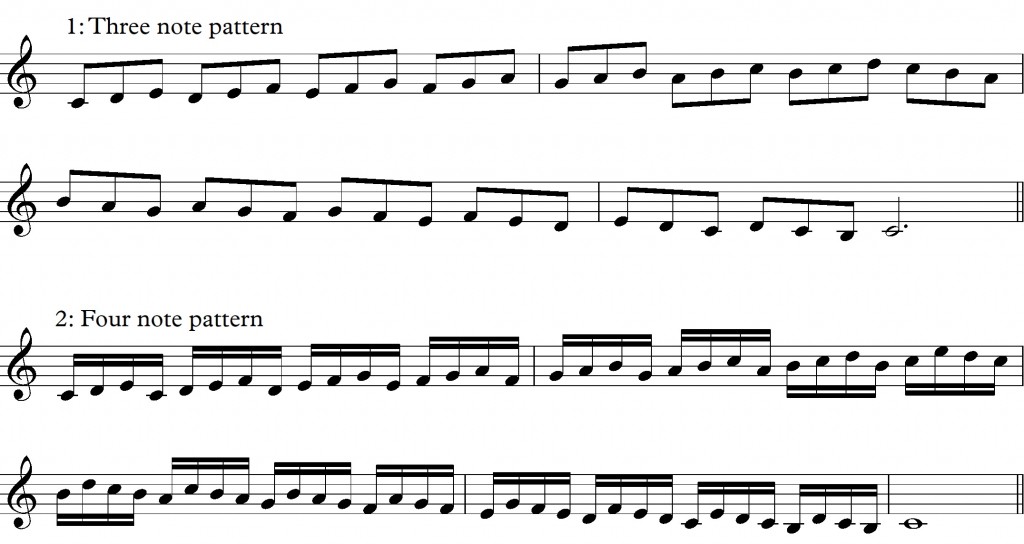 I hope you find some benefit to incorporating these kinds of exercises in your own practice or with your students. In my studio we now do a yearly scale test, and my students are expected to play these patterns in all keys from memory.