This week’s featured book is a lesson in humility. Robert Nagel was a founding member of the New York Brass Quintet and has held teaching affiliations with Yale, Juilliard, the Manhattan School of Music, and more… His book Speed Studies is a collection of scale exercises designed to go beyond the traditional major/minor scales most of us encounter as beginners. His own preface says it best:

On first acquaintance with these drills and studies it may seem to the student that there are no determinable groupings or sequences to certain successions of notes. However, such is not the case. Although much of contemporary music appears to avoid obvious groupings of notes, it is the purpose of this book to bridge the gap between the more obvious scale patterns of 19th century music and the more complex and irregular groupings found in much of our present day music by presenting instrumental study materials of an intermediate complexity. The patterns employed here usually consist of from three or four to eight notes. These melodic formations are frequently contrary to the established rhythmic pattern. For example, a three-note melodic grouping may occur and be repeated in a four sixteenth-notes per beat rhythm. It is the writer’s belief that specific comprehension and recognition of these various melodic formations will aid the student to read and execute this study material with greater speed and accuracy.

This week’s scales are after the jump.

To ease our way into this book, here are two relatively straightforward examples from near its beginning. As Nagel recommends, try to identify the patterns – both the scale pattern and the larger patterns connecting beats and measures. 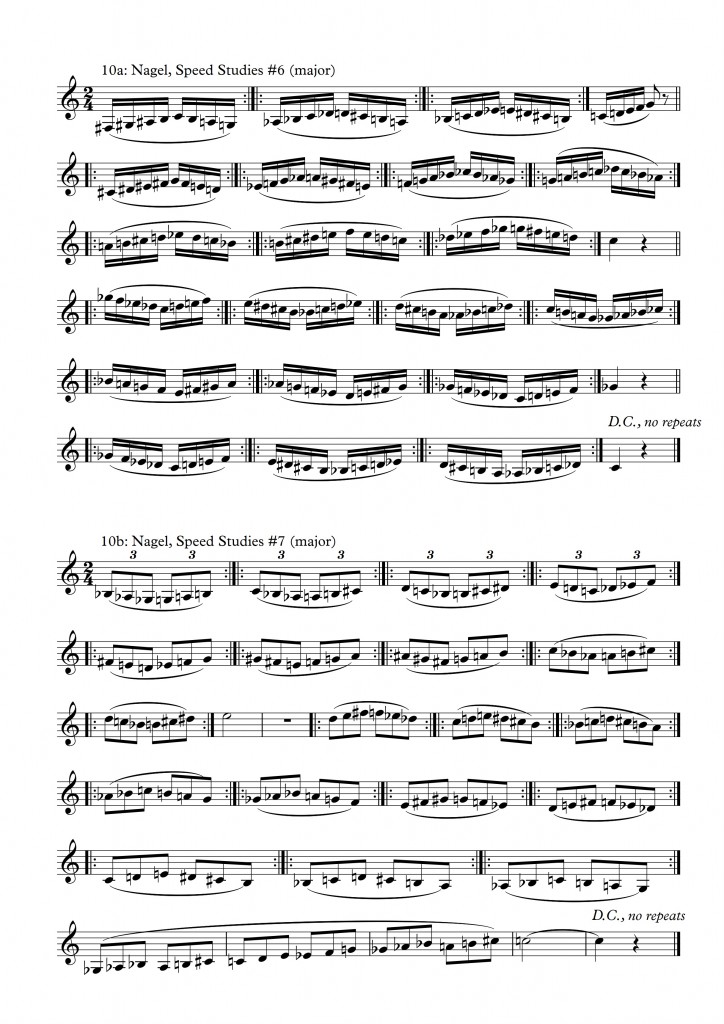