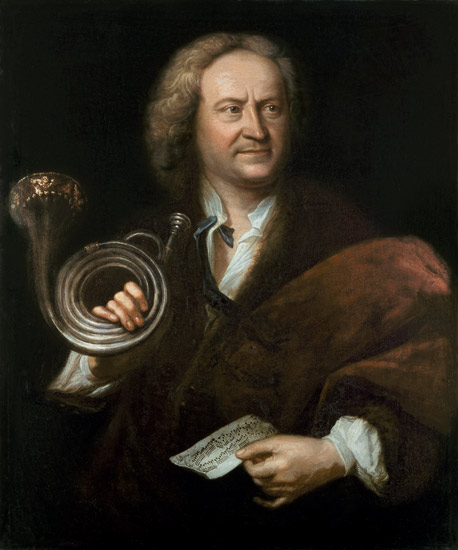 Today’s exercise has it all: a living history, virtuosity combined with artistry and even a little detective-work thrown into the mix. We’re talking about the famous Abblasen call by Gottfried Reiche.

Gottfried Reiche is best known as Bach’s principal trumpet in Leipzig, whose apparent skill is deduced from the incredibly virtuosity of the trumpet parts Bach wrote for him. Reiche actually composed 122 “Abblasen” fanfares during his lifetime, but unfortunately they’re lost.

What we do have is a famous painting by E.G. Haussmann in which Reiche is depicted holding a scrap of paper – the music on that scrap of paper in the painting is legible enough that we have transcribed it to get the sole surviving “Abblasen” attributed to Reiche (really). That transcribed scrap of paper has been the theme song to CBS Sunday Morning for decades, played as recorded by Don Smithers on a baroque trumpet, then Doc Severinsen on a piccolo trumpet and currently Wynton Marsalis on a piccolo trumpet:

Here’s another recording, this time on baroque trumpet from Nate Mayfield:

We’ll close with the fanfare itself. Transpose it up, down, forward, backward, learn it in every key and by memory, slur it, tongue it, double tongue it… It’s a beautiful, living part of our history as trumpeters and a great challenge to play: